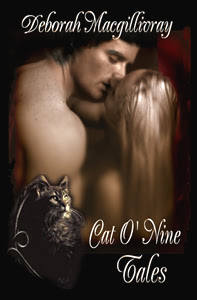 Many of you who get the Romantic Times Magazine will receive the newest issue Monday, October 1. In it will be an ad for Highland Press advertising three HP books - Into The Woods by RR Smythe; The Sense of Honor by Ashley Kath-Bilsky; and my one-author anthology, Cat O' Nine Tales. The other two books are already out; mine goes to Press on Monday, so there will be a small delay before they reach Amazon and other online outlets.

This collection has eight of my stories -short stories and novellas - many have received awards. Its ninth tale is a new novella. Highland Press is putting them into the Collector's Edition, tradesize paperback, because they received so many requests to have my works under one cover for collectors.

So do hang on!! If you would like to be notified of when the books are hitting the shelves, you can go to my website and use the contact me button to email me and get on the notification list. That way you will know precisely when the books are shipping.

The stories are: Bad Cat; Getting It In The End; Double, Double, Toil & Trouble; Rider in the Storm; Devil in Spurs; All I Want For Christmas Is A Hula-hoop...And A Mother; Blue Christmas Cat; Chicken What Du Hell?; and A Very Special Man.

They are an eclectic mix of Contemporary, Historical and Paranormal Romances, and each story has a very unusual feline. So this book will delight Romance readers who especially love cats. A super gift just in time for the Holidays!

Because I am a deep cat lover, half of all my royalties will be donated to Alley Cats to help them with their great efforts in rescuing feral cats worldwide. (www.alleycats.org)

Posted by Deborah Macgillivray at 9:57 PM No comments:

At the moment, I am reading Georgette Heyer's The Reluctant Widow. I've no business reading for pleasure at the moment because I'm behind on a deadline, but I wanted to see how a classic author dealt with a basically implausible premise.

I've done that. I should put it down, but I'm hooked.

There's a dog. It's name is Bouncer, and in my current mood, I think it is the most masterfully written character in the book. Bouncer certainly steals his scenes. He is carrying the book, at the moment. I want to know what this bad dog will do next, because he is partially trained, and therefore cannot be trusted to bite the villain, or to not bite the heroine.

He's frightening, but endearing. He'll cheerfully take a bribe... but will not necessarily modify his behavior out of gratitude.

Horses in Manhattan -- a Newsweek article

I always took horses rather for granted in my favorite historical romances, but this Newsweek article opened my eyes to some things I'd never considered.

From a morality point of view, I probably will rule out taking a horse-drawn carriage ride in a major city, such as New York or Indianapolis, as a shortcut to researching that mode of transport, if I ever desert my alien romances and return to Historicals which were my first love.

Men and animals. Men who are animals. Animals who inspire men -- or male characters. Before I begin this, let me just say that I don't consider men animals. I like men. I married one male and I gave birth to another and I respect and admire both of them. I'm also not a reverse chauvinist. I don't require that I be treated like I am a man or like I'm better than a man. I'm not a man. I don't want to be a man. I like being a woman. Heaven help you if you suggest that I am inferior in any way solely because of my gender, but different? Sure. Go ahead.

That said . . . let me also say I love animals. Never would I demean my dog by suggesting he in any way resembles a human male--

Sorry. I just couldn't pass that one up*g*.

With regard to books and writing, like a lot of paranormal romance authors, I've linked human males and animals pretty closely in my upcoming release, PANDORA'S BOX (Dorchester, Feb. 2008). One of my main characters is a puca. A puca is a lesser-known shape-shifter with roots in nearly every culture's mythology. He's a trickster who can shift to human form but usually takes the shape of a dark stallion with yellow eyes. In my story, however, he assumes the more adaptable form of dog so he can more easily pass inspection as a normal part of my heroine's life -- in spite of his spooky eyes, irrepressible personality and inability to truly bark.

Now, I will admit that it's been fun to occasionally draw parallels between my puca Riordan in dog form and my human male character Teague. Hey, when you discuss food, sex, or getting a male "fixed," I'm thinking the reaction among males would be entertainingly universal, independent of species. But more than that, having this seemingly unappealing mutt in my heroine's life is an effective characterization tool. Think about it. You can tell a lot about people by the way they treat animals. Do they feed them? Baby them? Kick them? Steer clear of them? Treat them firmly, sternly, hatefully, fearfully or dotingly? Is the animal seen as a friend, a nuisance, a baby, a rival, a member of the family?

And then there's the entertainment value. I write humor and I find dogs vastly amusing. That's why my tail-chasing hound Max shows up so frequently in my own blogs. To him, every walk around the neighborhood is an adventure fit for a knight in shining armor, with dragons (i.e., automatic sprinklers, trash cans, rival animals) lurking around every corner.

Ah, but don't forget the goopy moments. Picture your hero sleeping on the couch, with fifty pounds' worth of sleeping hound sprawled across his chest, muzzle tucked under the man's chin. What does this say about the hero? See? So many opportunities for characterization.

Natale Stenzel
http://www.natalestenzel.com/
Posted by gNat at 8:54 AM 1 comment: