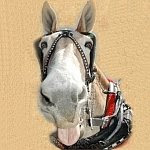 Note:
Socrates is a minature mule and the star of

Down Home Ever Lovin' Mule Blues
by Jacquie Rogers

Humans are so stubborn.

But never let it be said that we mules don’t take care of our humans. Mine is Brody Alexander. I’m Socrates, master of cogitation and entertainer of both large and small children.

Infinite patience is required to endure Brody’s obstinance. Granted, we john mules do have it easier than men. We don’t have this hormone thing going on so we don’t spend our lives trying to make little mules.

That gives us lots more time to cogitate. And believe me, I can think of a few more species who could do with a little thoughtful uncommon sense.

Human males, for instance. Why, they seem to spend every waking hour thinking about sex, getting sex, or being disappointed by not having sex.

That’s how I see it. Except I left one thing out—human males need more than sex. They need love. My human could use a little loving these days. Why, he’s been moping around worse than a porcupine on a bad hair day.

That’s where the cogitating comes in. If testosterone hadn’t clouded Brody’s thinking, he’d already know what he needs. Funny thing, those hormones.

The way I see it, my job is to help his brain listen to his other parts—especially his heart. And I have the answer. Yes, sir, I do. I just saw a pretty little filly drive down the road, the very same one who mooned over Brody ten years ago.

Read what happens to Brody when Socrates puts his plan into action. Perseus the Australian Shepherd and Guinnevere the skunk are gung-ho to help, along with the neighbor dog, Beauty (bloodhound/collie mix).
May your saddle never slip!

Down Home Ever Lovin' Mule Blues

Pets who ride on your shoulder

I was on a podcast the other day (thanks again, Rowena), and talking to Jacquie Rogers at the same time made me remember something almost relevant, especially when Fido the cat, my 19-year-old Tonkinese, tried to come up behind me and get my attention (usually by swatting at me). There was a time when he, and his student Bowser, got our attention by climbing the tallest chair in the house and jumped on the shoulders of the Hub and me (sometimes by surprise, sometimes by calculation). Neither were dainty, one 18 lbs at his heaviest and the other about 15 lbs, so it was better if we were prepared for the jump. If only we could have had them like that outside, walking around. They were both very happy being carried around like that.
Long ago, when we went more regularly to comic book conventions, there was someone who walked about with a toy stuffed dragon perched on his shoulder. It was a little out of the ordinary then (why, at a comic convention? It's hard to say), but he did it consistently. At least it was memorable (and considering it was several decades ago, it must have been memorable, since I still remember it). Jacquie and I are putting together a dragon workshop. It makes me wonder if I should go find a stuffed dragon for each of us to do the same thing.
A few decades makes a difference. It was odd then, but now, it would be amusing. Maybe it was amusing then. But we were much younger and so much more worried about not looking like an idiot. Now? Don't worry about it nearly so much.
Posted by EilisFlynn at 10:01 AM No comments:

Mules, Males and other animals

I love talking to people. I ought to do it more often!

On today's Crazy Tuesday show, I chatted with some animal-lovers who happen to be authors. Some are most definitely kindred spirits, and there's at least two books I'm going to treat myself to before Christmas.

Among the characters trotted out to meet me was Pretty Bottom, a proud porcupine; Christopher-the-Assassin, a cat; Nova the cowardly dog who once overcame his fear to chase a bear... which reminds me of the cartoon "Courage"; a parakeet named Jubilee who likes Bonnie Tyler and The Randy Rogers Band; Miz Fuzz the cat with her own boom box; Foutchie the foot fairy; an exotic bird that throws seeds; Socrates the wise --and wise-cracking mule who believes that sterility improves the masculine mind and ability to cogitate; a pet chicken of a Warrior Trainer; Guinevere the skunk; a terrifying cat who takes his toys to water but can't make them drink; some extremely smart ravens; and a deliriously happy guinea pig.

Oh! And a 300 year old gentleman who is trapped in the body of a cat. I can't begin to imagine (well, I can) all the things he's forgotten how to do, and all the new things he has to learn once he finds a lady who can lift the spell in A Cat O'Nine Tales.

CONTEST! Males, Mules, and Other Animals

10 categories in all and GOBS of prizes from a dozen authors (including some of our fabulous IWOFA authors!). Plus, everyone will get to see how cute your pet is! Cats, Dogs, and Equine are the three groups. Each group has three categories: cutest, most heartwarming, best overall. And then the tenth category is the 2008 Best Pet Picture.

(There are more prizes than represented in the following graphics, and not all titles are prizes. Please go to http://www.jacquierogers.com and click on Contest for a complete listing, as well as contest procedures and rules. Because of postage costs, we have to limit entries to USA only.)

So enter your pet pictures today!

Posted by Jacquie Rogers at 1:53 AM No comments: