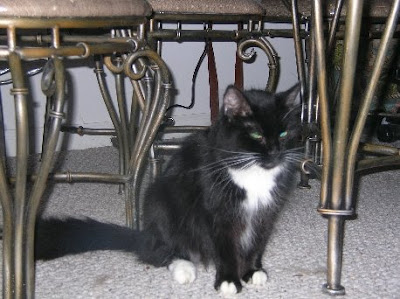 Cats are the most adaptable creatures. Give them a safe place, regular food, and a nice clean litter box and they will adjust. The younger they are, the more quickly they adapt. But what about the older cat who has belonged to one person for all or most of their kitty life? Cats grieve; the longer the association that is being broken, the more they can actually will themselves not to live. Think of Grey Friar’s Bobby. That’s the worry I faced when I took in Miss Fuzz, the elderly cat that belonged to my dear friend, author Dawn Thompson, who died in February.

Dawn bought Fuzz when she was a kitten from a pet store. She said there were other pretty kitties vying for attention. However, back in the corner of one cage was a small tuxedo cat. Her foot had been broken, there was not much hair on her tail, the fur on her forehead was missing and one set of eyebrow whiskers was gone. Obviously, this small kitten had gone through some ugly abuse. The pet store owner said he would probably have to have her put down because no one would want the poor thing.

Dawn knew she and Fuzz were meant to be. Life had never been very good to Dawn, thus she saw another kindred spirit in this very tiny cat, took her home, and a friendship that lasted sixteen years was born. Fuzz bloomed under Dawn’s TLC. Her tail is bushy and everything has grown back―save for the right eyebrow whiskers. Her back right foot still points a little to the side. Those are differences you notice immediately. After Fuzz came to live with me, I noticed other oddities, which had to result from the abuse. Instead of the natural rounded form of her ribcage, hers is flatter. You will also notice upon feeling, she had four ribs broken on the left side.

When Dawn became ill in hospital last autumn, she feared she might die, and bemoaned what would happen to Fuzz. I have often pondered this about my own cat. What would happen to her if I die? How would she accept me not being there for her? It was a serious concern due to my own bad health these past two years, so I empathized with Dawn’s panic at fearing for Fuzz’s security. A feline that is used to being a pampered puss, all their whims indulged, how do they adjust to not only losing the love that they have grown to believe will always be there, but suddenly ‘their person’ is just gone? With humans, we go through funerals; people offer explanations of death. What do cats think when one day their person goes away and never comes back? They cannot say, “Oh, she died. I need to move on.” They wait. And wait. In Fuzz’s case this waiting was even more heart-rending because of Dawn’s long hospitalization, and the fact she did come home once. At one point, after a few weeks, she was sent home from Brookhaven Hospital. Fuzz had Dawn for part of a day before it ended up with Dawn having to be rushed back. Fuzz must have thought Dawn came home once, surely, she would come home again. If she just waited long enough then Dawn would come again.

A housecleaning service was sent into the apartment; strangers came and went before, during and after the funeral. Fuzz was very territorial, Dawn said, and very protective of her. Dawn suffered from lymphoma and a nurse had to come every morning to wrap her legs to compress the fluid out of them. Once the nurse hurt Dawn accidently, and when she cried out Fuzz jumped up on her lap and hissed at the nurse and wouldn’t let her near Dawn again. Suddenly, not only was this poor cat alone for the better part of four months, now people were invading her home.

I knew Fuzz would come to me. I told Dawn this a couple years ago, that I would take Fuzz if anything happened to her. But when I made that vow I was in good health and could drive to New York. I was not in shape to make that trip when the time came. I had pneumonia for months at the start of the 2007, then a heart attack in July. There was no way I could make that drive. Plans were discussed, putting Fuzz in a carrier and shipping her with an airline ticket, but fortunately a very sweet man named Don said he was making the drive to the South, he could carry Fuzz to me. Bless you, Don! You’re an angel. We arranged things and Fuzz came to me on a late Sunday night a little over seven weeks ago.

So now, poor Fuzz not only didn’t have her person, she was removed from her home of sixteen years and was carted halfway across the US and given to a complete stranger. Worse, there is a ‘furry critter’ in this unfamiliar house where you have never seen before! Fuzz had NEVER seen another cat. My cat, Foutchie, is seven now. Though she was raised with other cats, the last one died two years ago. She ‘inherited’ everything and has a bit of a problem sharing. I hoped they would take one look at each other and be friends. Not to be. Fuzz was terrified of Foutchie. And Foutchie had a cat hiss at her! What to do? Fuzz would make 2 ½ of Foutchie. I cannot just toss them out there and say get along. Worse, Fuzz was known for slinking off in the old apartment and hiding. What if she did that here and I couldn’t find where she went? Knowing how traumatized she was I feared she would crawl off in some corner or under something. We are packing and preparing to move later this year, so we are slowly sorting through stuff in the attic and such, boxing everything. I was seriously upset she would get someplace she deemed safe and I wouldn’t be able to find her. I had knee surgery last year and couldn’t get down and play hide and seek with a kitty that didn’t want to be found. Worse, would she come out? I have seen cats crawl off and hide like this for days; they can dehydrate and die.

Well, I was worried. Here I promised to care for Fuzz and give her a good home; I couldn’t allow that to happen. Fuzz wouldn’t even allow me to pick her up without going on the attack. Hum…what to do? We hit on the idea of putting her in the one bedroom used for storage. She would have a full bed to sleep on, her own heater, plenty of room for a kitty. I hated “locking her away” until she grew to trust me so we took off the solid door to the room and put up a louvered door, with the slats facing so she can watch into the house, yet still feel safe.
She quickly sussed out the bed and claimed that. I had some things Don had brought that were hers and I put them there to give her a sense of something from her old life. Dawn had prepared me how Fuzz liked things. She needs more than one water bowl, likes milk in the morning and tuna in the afternoon. So immediately I had her routine matching how Dawn cared for her. My editor, Hilary Sares, said tuna every day wasn’t good for a kitty, so I gradually moved her to canned food. Her appetite gaveme hope she would not allow grief to claim her. At sixteen it was a serious concern. Older cats can become frail so easily, and once they lose muscle, it’s hard for them to regain it. Fuzz ate and showed a strong appetite.

Over the past seven weeks, she’s gradually accepted me, maybe is even growing to like me. She expects things done her way, but allows for new adventures such grilled chicken breast for lunch. She hears me coming into the kitchen and gives me so long to gather her food and water and arrive. I am still cannot pick her up, but I am able to pet and stroke her. She comes to me. This week, she finally meowed. She had been silent. No meows, no purrs. Dawn said she did a lot of talking to her, so I figured her silence was another side of her grief. She often refused to look at me when I came into the room. I think she believed if she didn’t look, she could grieve in silence and still pray Dawn would return.
Bittersweet, she started talking to me just days ago. I guess she is finally accepting life has moved on. Yes, cats are very adaptable, but I often wonder what they think about their person just going away and never coming back.
I have a new Dell computer, Vista OS. My old camera won’t work with Vista so I must buy a new camera to go with it, so sadly, no Fuzz pics yet. Maybe soon. Maybe we will have bonded enough I can present you with one of me holding her.

Maybe she will be purring.
Posted by Deborah Macgillivray at 11:12 AM 2 comments: