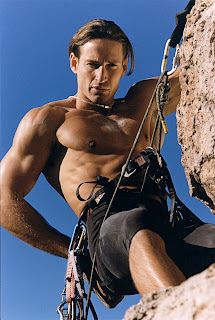 Now, here's a male of the species who is welcome to make me very aware of bear.

I can't resist a totally --well, not totally-- gratuitous hunk to start the day. Look out for further news from me about how this manly pose was transformed into a poster representing 'Rhett (Prince Djarrhett) the hero of the sequel to Forced Mate and Insufficient Mating Material. Or maybe you've seen the ad with the temporary cover?

Even if I knew that he might "shift" into bear form at any moment, I think I'd risk letting a hero who looks like this give me a Bear Hug!

Anyway... Not only is today (Sunday May 11th) Mother's Day, but it is also the start of Bear Awareness Week.

Angie Fox, Carrie Masek, Sandy Lender, Cynthia Eden and Charlee Boyett-Compo are joining me on internet voices radio tonight between 9pm
Eastern and eleven pm to give a whole new depth of meaning to Bear men and Romance.

We'd love some listeners, even for a little while.

FOR CRAZY TUESDAY: In the last program, Jade Lee and Emily Bryan (aka
Diana Groe) talked about everything below the belt in honor of Earth
Day... from Brazilian waxes for courtesans, to castration, to foot
binding.


FOR CHERRY PICKING SPECIALS, which is the irreverent and irregular
Sunday night-time show about Romance heroes and the animals they shift
into being when the right female comes along.

Romance, loaded (with love) for Bear

Posted by Rowena Cherry at 1:17 PM No comments: 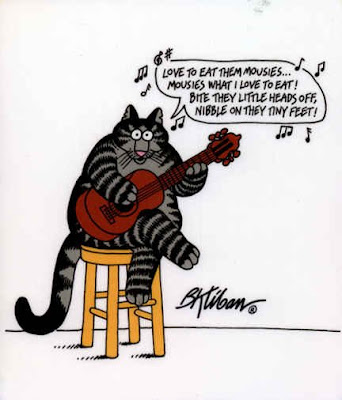 A cat at rest will tend to remain at rest, unless acted upon by some outside force - such as the opening of cat food, or a nearby scurrying mouse.

A cat will move in a straight line, unless there is a really good reason to change direction.

All blue blazers and black sweaters attract cat hair in direct proportion to the darkness of the fabric.

Heat flows from a warmer to a cooler body, except in the case of a cat, in which case all heat flows to the cat.

A cat will stretch to a distance proportional to the length of the nap just taken.

All cats must sleep with people whenever possible, in a position as uncomfortable for the people involved, and as comfortable as possible for the
cat.

A cat can make her body long enough to reach just about any counter top that has anything remotely interesting on it.

A cat must lay on the floor in such a position to obstruct the maximum amount of human foot traffic.

A cat will accelerate at a constant rate, until he gets good and ready to stop.

Cats must attend all meals when anything good is served.

No rug may remain in its naturally flat state for very long.

A cat's resistance varies in proportion to a human's desire for her to do something.

Cats know that energy can neither be created nor destroyed and will, therefore, use as little energy as possible.

Cats also know that energy can only be stored by a lot of napping.

If a cat watches a refrigerator long enough, someone will come along and take out something good to eat.

Turn on an electric blanket and a cat will jump into bed at the speed of light.

A cat will always seek, and usually take over, the most comfortable spot in any given room.

All bags and boxes in a given room must contain a cat within the earliest possible nanosecond.

A cat's irritation rises in direct proportion to her embarrassment times the amount of human laughter.

A cat will drink his weight in milk, squared, just to show you he can.

A cat's desire to scratch furniture is directly proportional to the cost of the furniture.

A cat will always land in the softest place possible; often the mid- section of an unsuspecting, reclining human.

A cat immersed in milk will displace her own volume, minus the amount of milk consumed.

A cat's interest level will vary in inverse proportion to the amount of effort a human expends in trying to interest him.

Any pill given to a cat has the potential energy to reach escape velocity.

A cat is composed of Matter + Anti-Matter + It Doesn't Matter.
Posted by Deborah Macgillivray at 4:25 AM 1 comment: