Hi Everyone! Thought I'd introduce myself!

I just wanted to introduce myself and pose a couple of questions. First, who am I? Well, my name is Teresa D’Amario. I’m a paranormal romance writer, who writes about shapeshifters. While shapeshifters COULD be human, mine are based on animal society. My first release, SheWolf is available at Freya’s Bower, and I’m sure you’re going to love it.

Now, the first question: Why are animals so interesting to use as shapeshifters for paranormal romance?

My thoughts are simple. A shapeshifter who operates primarily on instinct can not be politicially correct.

Politically incorrect writing? Who would have thought it would be so fun to read such things! A few months back, Angela Knight posted on her blog “Where have all the balls gone.” This is still one of my favorite blog posts of all times. It discusses the rise of the alpha male in current paranormal romance. But to me, I think part of what makes our Werewolves, and Werecats so fascinating is because they don’t have to be like real men. They don’t have to worry about being chauvinistic, because they expect their woman to be almost as powerful as they, if not in strength, at least in intelligence. They don’t get yelled at for being dominant, for taking what they want, for protecting those they love.

Having worked with dogs for years, I know it’s in all of the above.
But in SheWolf, I took it a step further. The woman runs on her instincts. Feminine. Wolven and human. They work together to create a powerful female. She loves what she does, she protects those she cares about, and she uses those instincts and intelligence to move through life.

So, if you were an animal shifter, what animal would you want to be? What animal has skills and instincts you admire the most? Who knows. You may find that animal in one of my future releases!
Posted by Teresa D'Amario at 6:17 PM 1 comment: 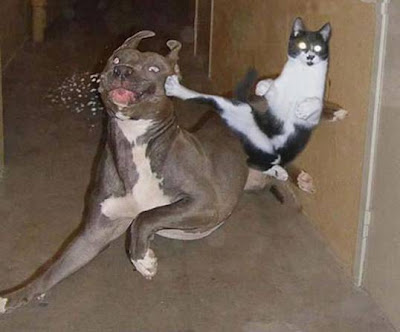 Not being a fan of dogs, this image really appeals to me. Has anyone written a story about a kung fu fighting cat?

A close-up of a cat's tongue 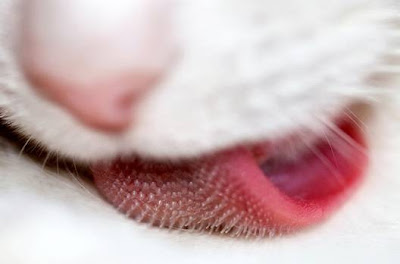 Have you ever been licked by a cat? It's not unpleasant.
Posted by Rowena Cherry at 7:03 AM No comments: