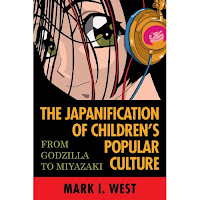 A few days ago, I got email from Mark I. West, famed children's literature professor and editor of a number of volumes on the same, saying that Japanification of Children's Popular Culture had been published from Scarecrow Publishing. This pleased me because about four years ago, when he pitched the idea to his editor at Scarecrow (originally conceived as a tribute to the 50th anniversary of Godzilla), he asked me to write an essay on the topic (I don't have a copy yet, so I don't know exactly how many contributors Mark ended up with).

After some thought, I came up with "Two Worlds, United by Anime," about the anime and manga I read and watched when I was a kid growing up in Japan, and then about the anime I watched when we came back to the States. Then the way these things go, I sent it in and promptly forgot about it. I was happy to read that it had finally been published, and now I can't wait to see how it turned out. Take a look!

Posted by EilisFlynn at 3:28 PM